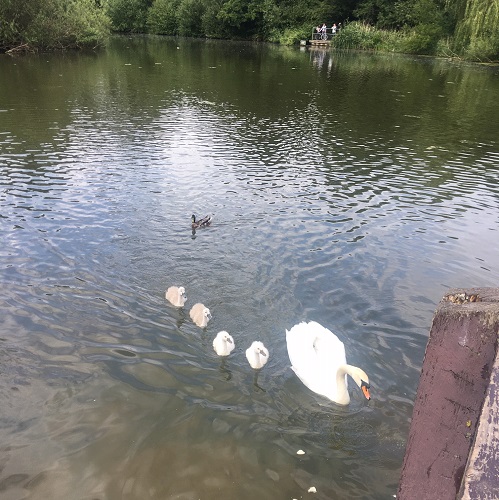 In the first few weeks of lockdown, I felt lazy and somewhat depressed.  I couldn’t pull myself out of it. All the household jobs I’d told myself would get done when I had more time, remained undone; I lacked interest and motivation. I was constantly in the kitchen, getting myself snacks and I soon felt the weight creeping on. I found little solace in reading or in TV.  Previously I found getting the train to work tedious; now the thought of travel, getting my lunch and a coffee in Waitrose, felt exciting!

My yoga group began doing online yoga, and that helped, although I still felt myself heavy and unfit.

The benefits if walking

I began going for walks, and quickly discovered how much better I felt after. It was a combination of getting out of the house (which could feel like being imprisoned) and walking for longer periods.  You can use the Active 10 app to help you track how much brisk walking you are doing.

Initially, I went at different times of the day, but I became nervous of the crowds, as many didn’t observe social distancing, and some joggers simply crept up on me so that I didn’t have a chance to get out of the way.

I began going out early morning, between 7 to 9am.  I found people friendlier, wanting to say hello, or have a quick chat. I met a lady going to work in a factory where they’d been commissioned to make ventilators for the NHS.  She told me she was one of the few who chose to work, rather than be furloughed.  Others told me they were getting their walk in before starting work from home.  Most said, this was the best time to be in the park.

I began noticing nature. The ducks in the pond were very noisy and fighting.  I assumed it was over food. I learnt not to feed them bread, which isn’t good for them, but to feed them specialist food (which I didn’t have) or sweet-corn or peas.  I began bringing a small bag of same.  Previously I wouldn’t have dreamt of leaving the house before showering/putting on make-up. Now I jumped out of bed, pulled my clothes on, made a small flask of coffee and I was off!  In all weather.  It felt important to get my walk in before work.  I no longer worried about the rain making my hair frizzy – without visiting a hairdresser for months, a bit of rain felt harmless.

The pond that had been so noisy, became quieter.  The coots had given birth, closely followed by the ducks, and then the swans!  Over the weeks, it was a real pleasure watching them grow bigger and stronger.  Initially, there had only been glimpses, but then it seemed as if the mothers’ wanted to show off their babies, and she and then swam towards their eager audience!

Previously I’d walked through the park without noticing anything.  Now, I revelled in the sounds of the different birds, and I enjoyed the butterflies and frogs.  I didn’t enjoy seeing the rats, but I can just about forgive them as they are part of nature. Other walkers informed me of other habitat, and I soon saw a Grey Heron, with a huge wing span and a nest of kestrels, high up in a man-made box on a telegraph pole.

I feel so lucky that all of this was on my doorstop, yet up until lock-down, I was oblivious to it all.  Find your nearest park in Merton

This website uses cookies to improve your experience while you navigate through the website. Out of these, the cookies that are categorized as necessary are stored on your browser as they are essential for the working of basic functionalities of the website. We also use third-party cookies that help us analyze and understand how you use this website. These cookies will be stored in your browser only with your consent. You also have the option to opt-out of these cookies. But opting out of some of these cookies may affect your browsing experience.
Necessary Always Enabled
Necessary cookies are absolutely essential for the website to function properly. This category only includes cookies that ensures basic functionalities and security features of the website. These cookies do not store any personal information.
Non-necessary
Any cookies that may not be particularly necessary for the website to function and is used specifically to collect user personal data via analytics, ads, other embedded contents are termed as non-necessary cookies. It is mandatory to procure user consent prior to running these cookies on your website.
SAVE & ACCEPT